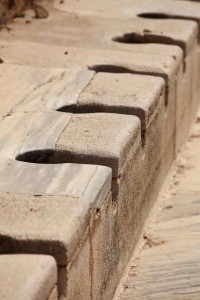 If there is one domestic structure that has a very interesting history, it’s the toilet. Before toilets as we know them today began to be installed, we relied on outhouses, chamber pots or just picking a spot to help keep nature fertilized.

Most would be surprised to learn that the first flush toilet was actually invented in the very late sixteenth century but it didn’t start to become a common domestic plumbing tool until the early 1850s.

During the 11th century, the construction of castles started to boom and for the first time, chamber pots were built as a connected appliance.

The chamber pot rooms were referred to as the “garderobes”, which translates as literally “guarding the robes”. It is believed that soiled robes were hung there in order to allow the ammonia stench of urine to kill off fleas.

Initially, the garderobes were tiny niches that ran vertically on the ground but they rather quickly evolved into smaller protruding rooms and bottomless cubicles. However, they proved to be a weak spot within the castle’s architecture.

As a result, they started to build towers sometimes whole-towers to solve the problem of the waste falling onto the royalty and others who may have been visiting the castle on business or other matters. Some of those towers dropped the bio-hazardous waste into gutters, trenches or simply to fertilize the ground on the bottom.

Though not every castle was open to the idea. An 1167 diagram of the Christchurch monastery shows a clever system for the times which separated rainwater, drainage, and waste.

It is not known exactly when the word “toilet” was coined but it is believed to have been in common use in the English language since the 1600s or 1700s.

Initially, the French word “toile” meaning clothe referred to the clothe that both men and women wore draped over their shoulders. The word, “toilette” referred to the ensemble of women’s vanity tables. 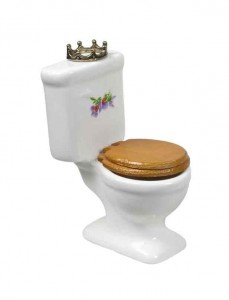 Unlike what is commonly believed Thomas Crapper did not invent the flushing of the toilet as this was done in 1596 and he lived from 1836-1910. Crapper was simply a very well-known British plumber and industrialist for his time.

Public toilets began to be installed in Britain when Crapper was just 18 and the word “crap” has been used in the English language since the mid-fifteenth century.